By Lawrence Booth for the Daily Mail

Moments before he was dismissed for his latest no-man’s-land contribution to an England scorecard, Ollie Pope sliced left-arm spinner Ajaz Patel to third man. The ball skidded away for four, but more uppishly than he intended. It might have been a warning.

Three deliveries later came an even more tempting delivery, shorter and wider. Pope threw his bat in its general direction, and edged behind to Tom Blundell for 19. He headed straight for the pavilion, as if lingering at the crease might have prolonged the embarrassment.

For New Zealand, who had taken three quick wickets after lunch but then allowed Pope and Rory Burns to add 42, it was a welcome free gift. 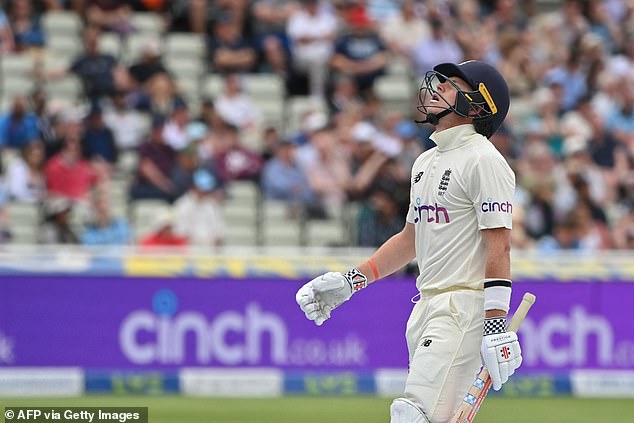 Pope has talent to burn and, at 23, time on his side. But he is playing like a batsman in a hurry – to make a score and an impression, to live up to the advance publicity, to justify his place in a line-up that will soon have Ben Stokes and Jos Buttler available again, and has not yet given up on Jonny Bairstow or Moeen Ali. Then there are Chris Woakes, Ben Foakes and Sam Curran.

When Pope scored an electrifying 135 not out against South Africa at Port Elizabeth in January 2020, he appeared to be doing little more than confirming his status as England’s next batting prince. After six Tests, he had an average of 51, and the world – it seemed – at his feet. He had a natural batting rhythm, embellished by white-ball flourishes. It was all very exciting.

Yet that innings remains his only Test hundred, from 31 attempts. And yesterday’s cameo was the 10th time in 11 he has reached double figures without passing 34. In all, 18 of his Test knocks have suffered the same fate. He is clearly not a batsman unable to score runs. He is just struggling to construct an innings.

Much has been made of Pope’s change of guard to middle and off. The ex-pros explain that this leaves him vulnerable both to anything that hits his pads – as Tim Southee did with ease at Lord’s – and to balls wide of off stump that he would once have left. 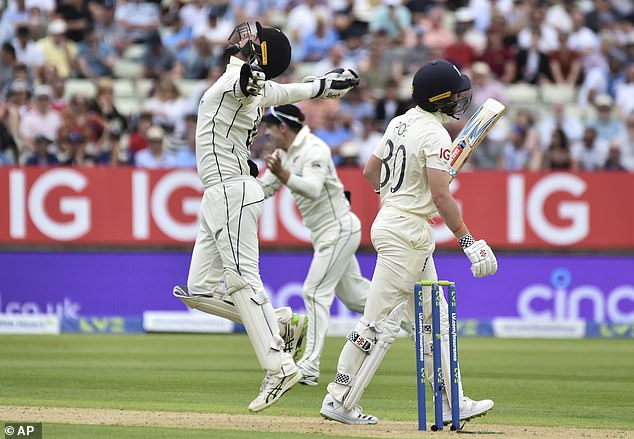 Those issues are clearly true, and it’s possible Pope might previously not have been able to reach the ball from Patel that proved his undoing. But underpinning his essential elegance is a sense of unease. And in that respect Pope embodies an England batting line-up that can’t quite shake off the charge it is forever in transition.

There are mitigating factors, of course. Covid has played havoc with schedules, which means even the stars are rested and rotated. The IPL has interfered, and caused injuries. There are moments when you wonder if England will ever again field their strongest XI.

But New Zealand made six changes for this game, and their second-stringers have immediately made their presence felt. Matt Henry removed Dom Sibley and Joe Root in quick succession after lunch, Patel dismissed Pope and Olly Stone, and Daryl Mitchell went at just two an over and held two smart catches.

Above all, they exuded comfort. When a chance flies towards the New Zealand slip cordon, you fully expect someone to hold on to it. By contrast, when Zak Crawley or James Bracey get a full-length ball outside off stump, you fully expect them to nick it.

The chances are Pope will relocate his mojo and his tempo. In their differing styles, Rory Burns and Dan Lawrence yesterday showed him how it might be done. And batsmen don’t achieve a first-class average of 51 from as many as 85 innings by accident. But you feel Pope needs to take a step back, a deep breath, and above all a bit of time.